As next month’s deadline for next phase of bans on single-use plastics approaches, the Australian Retailers Association (ARA) says the transition to the circular economy is a top priority for retailers and the sector supports a timely and cost-effective phase-out of single-use plastics.

ARA CEO Paul Zahra said whilst the ARA favours a nationally consistent approach to sustainability measures, the NSW plan provides a pragmatic and clear approach to the transition.

“Addressing the challenge of plastic pollution is a top priority for retailers and Australian consumers. As a sector, we align with government and community concerns about the impact single-use plastics have on the environment and we acknowledge retailers are a significant part of the solution,” Mr Zahra said.

“Retailers have had 12-months notice of the changes in NSW and most are well prepared for the next phase of bans. However, we remain concerned about potential non-compliance amongst smaller retailers, many of whom remain in crisis mode following the pandemic and with crippling labour shortages. Some retailers may remain unaware of these bans, have had insufficient lead-time to run down stock or are busy managing other priorities in the lead-up to Christmas, with limited staff and resources.

“We continue to advocate for an education-before-enforcement approach for these businesses and encourage them to reach out to social enterprises like the Great Plastic Rescue so that non-compliant stock is not sent to landfill in order to comply with these bans.”

The ARA also welcomes the proposed expansion of the container deposit scheme in NSW to include wine bottles, wine casks, spirit bottles, glass cordial and soft drink bottles of up to three litres.

“The proposed changes recently announced by NSW Environment Minister James Griffin are a logical next step in the transition to the circular economy, building on the successful ‘Return and Earn’ scheme launched a few years ago,” Mr Zahra said.

“Like government, we see this as a quick-win that already has strong community backing and the potential to see a further 400 million bottles recycled each year. We support the proposal, and are working with our members and their suppliers on how to deliver the most efficient implementation.”

The ARA has also renewed its calls for national consistency in relation to the phase-out of single-use plastics and the management of container deposit schemes.

“There are more than twenty single-use plastic categories being phased out across nine different jurisdictions in Australia – all are operating to an independent plan and timeline. While we applaud the proactive approach that NSW and other governments are taking, the lack of a national framework has meant this change has been more costly and complex than necessary,” Mr Zahra said.

“It’s encouraging to see greater alignment between the states and territories as demonstrated at last week’s Environment Ministers Meeting. What we need now is national consistency and a mutually agreed timeline that everyone can operate within.

“For retailers that operate in multiple jurisdictions, the existing arrangements are a headache they could do without.  We would like to see the collective resolve of industry and government to work together and deliver these important changes as quickly and as cost-effectively as possible. The Australian retail sector stands willing and able to work with government in meeting this goal,” Mr Zahra said.

The complexity of the different bans can be shown here in this timeline (also below), which was developed by the ARA to assist its members. 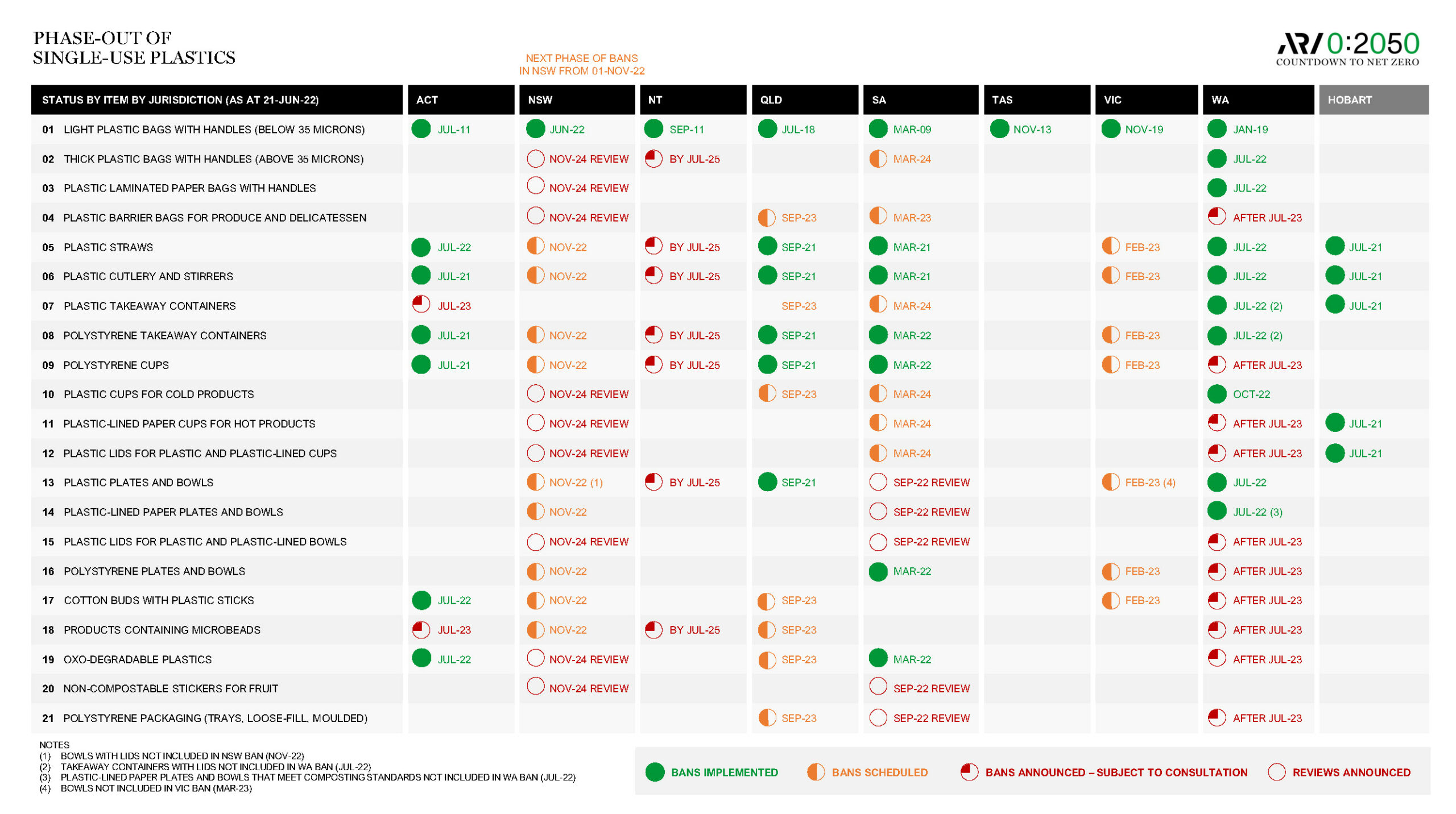 The ARA is uniting the sector behind a common vision for change through its Climate Action Plan and Net-zero Roadmap and was the second retail association in the world to sign the UN-backed Race to Zero Accelerator Pledge.

About us: The Australian Retailers Association (ARA) is the oldest, largest and most diverse national retail body, representing a $400 billion sector that employs 1.3 million Australians and is the largest private sector employer in the country. As Australia’s peak retail body, representing more than 120,000 retail shop fronts and online stores, the ARA informs, advocates, educates, protects and unifies our independent, national and international retail community. To learn more about ARA’s exclusive member benefits and more, visit retail.org.au

Australia’s largest national retail body the Australian Retailers Association (ARA) has bumped up its pre-Christmas spending forecasts by another two billion, now predicting a record $66 billion will be spent in the November to December Christmas trading period.

The country’s largest and most diverse retail trade body, the Australian Retailers Association (ARA) has welcomed concessions by the Albanese government in relation to the Secure Work Better Pay legislation but says that amendments proposed by the crossbench don’t go far enough to address significant business concerns. ARA CEO Paul

The Black Friday sales are set to provide retailers with strong results in the lead up to Christmas with research from the Australian Retailers Association (ARA) in collaboration with Roy Morgan forecasting sales to reach a record $6.2 billion over the four-day Black Friday/Cyber Monday weekend (Friday 25 November to Monday 28 November 2022).